2019 Ontario Winter Provincials – What an adventure!

The Ottawa National Diving Club made their way to Windsor Ontario for the 2019 Ontario Winter Provincials with 4 athletes.

Kathryn and Talia, both in Girls 16-18 age category were chasing their national scores and a spot on Team Ontario for a competition to be held in Madrid Spain in January 2020.

Charlee-Mae and Emmanuelle were chasing their national scores as they move into the Girls 13 age category!

Kathryn took the challenge of make Team Ontario and ran with it. In her first competition of the weekend on the 1m she put in one of her best competitions to date taking home the Gold Medal and this performance secured her spot to Spain on Team Ontario! As icing on the cake she took home another Gold Medal on the 3m Springboard and all 3 National Scores!

Congratulations Kathryn on a great weekend!

Talia for the 2019/2020 season decided with her coach to concentrate her efforts on the 3m springboard and platform events. This decision is starting to pay off as she put in some of most consistent performances! These performances landed her a Silver Medal on Platform and a national qualifying score as well as an outstanding 3m performance just a few points shy of a national qualifying standard! Congrats Talia on a great weekend. 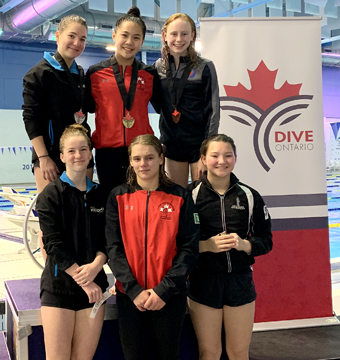 Charlee-Mae’s highlight performance came on the 1m springboard where she secured her first national qualifying score of the season! To make the moment even more special she was able to share this success with team mate Emmanuelle who also secured her national score in the same event. 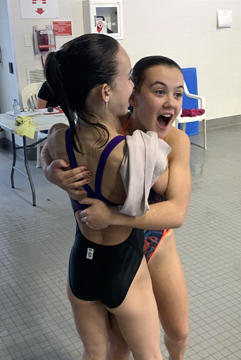 The two girls went on to compete on the 3m and platform events together.

Charlee-Mae earned a bronze medal for her tower performances just a couple points shy of the national standard.

Emmanuelle secured both her national standard on the 3m and platform and earned a Bronze and Silver Medal respectively for her outstanding performances. Congratulations girls on a great weekend!

It was an adventure and a half to get home between spending 7 hours in the Windsor airport fighting snowstorms and then driving home from Toronto after missing connections to Ottawa and losing our bags but these girls stuck it out and everyone made it home safely and we got our bags the very next day. Always an adventure. On to the next one!