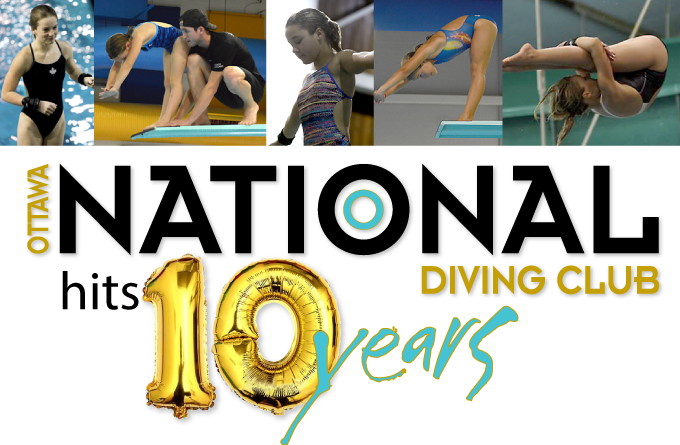 It’s been 10 years since the Murphy-Villemaire family took the plunge and started the Ottawa National Diving Club, and within a decade, ONDC has become a household name amongst the most respected diving clubs in the country. The early years weren’t without their hardships. It took long, exclusively volunteer hours at the outset, and funding from the family’s General Auto Glass and Upholstery business to cover expenses. There were the battles for pool time, members, fundingn and recognition.“Sometimes it feels like 20 years,” cracks club
founder Kathleen Murphy. “But, against many odds, we were able to build the club.”

The bright side of starting a new club was a blank slate to foster core philosophies. That included coaching athletes at their own pace and to suit their personalities, teaching life skills like manners, time management and independence, and providing an inclusive atmosphere for all athletes regardless of any disabilities or personal challenges they may face, thanks to skilled, bilingual coaching. “It really is more of a family than a team,” underlines athleteturned-club head coach Brennan Villemaire, Murphy’s son.

“The kids support each other. Our older athletes take the time to help out the little kids who might be struggling with one thing. It’s really close-knit.” The Ottawa National Diving Club took root in 2007 with all of 2 members. Ten years later, the club operates at 4 pools, with over 250 in its learn-to-dive program, plus more in its competitive ranks, including 8 national-level athletes. It is home to provincial outstanding divers and record holders, national champions, Team Canada members and international medallists. At the recent Dive Ontario awards banquet, ONDC scored the most diver of the year honours (across different age groups/levels) out of all clubs in the province.

Two others from ONDC received standing ovations at the event. Past Ontario Summer Games medallist Marianne Stintzi received a perseverance award for her accomplishments despite being legally blind, while Murphy was selected as volunteer of the year, with Villemaire delivering a speech to the crowd about his mother’s contributions.

“I wanted them to know everything she does for our club and our sport,” Villemaire explains. “How many hats she wears on a daily basis, how much time she’s dedicated, how she’s gone above and beyond for every single athlete in this club.” Murphy’s volunteerism has become infectious throughout ONDC, with many helping to fundraise, give their time, serve on the board of directors, and do whatever else is necessary for the club to thrive.

“I’m not the only volunteer, that’s for sure,” highlights Murphy, who feels rewarded when past athletes return to assist the club. “They don’t just leave the sport, they come back and coach for us, they come back and help us at a meet, or summer camps, or they just come back to visit. But they just keep coming back, and I think that really says a lot about everything we do.”

The Ottawa National Diving Club will host the Dive Ontario Spring Provincials from March 2-4 at Nepean Sportsplex. The meet will also serve as Diving Canada’s trials for the prestigious Dresden International Youth Meet in Germany. “We have probably some of the best junior divers I’ve ever seen in 10 years coming,” says Murphy. If anybody doesn’t know the sport, that’s what you should come and watch. You’ll see the entire country at its very best.”